Crime Stoppers has joined forces with the eSafety Commissioner to rollout a Child Protection campaign right across the country to combat child sexual abuse and unwanted contact online. 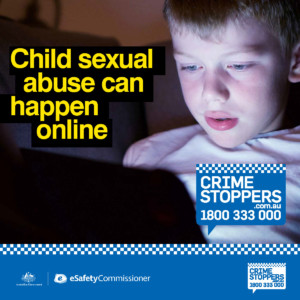 Today’s national launch in Melbourne follows a highly successful pilot of the campaign in NSW between April and November 2019, which resulted in a 62% increase in complaints to the Cyber Report online reporting form as well as a 5% increase in the number of contacts to Crime Stoppers specifically about online child abuse.

Information received during the NSW pilot has already resulted in a number of apprehensions and new investigations.

In launching the joint awareness initiative, Crime Stoppers Australia Chair, Ms Diana Forrester, said the national campaign has been designed to better educate people about the need to be on the lookout for and prevent child sexual abuse material and unwanted contact online.

“There is no doubt that child sexual abuse material is rife on the internet, so it is more important than ever for parents and caregivers to be aware of the real and present dangers faced by children when they spend time online,” Ms Forrester said.

“Predators are gaining increased access to children online through a range of popular apps, games and social media sites to solicit sexual images or video, or harm them physically. We want everyone to be vigilant and if you suspect or see something related to online child sexual abuse then report it immediately so action can be taken.”

In the 2018-2019 financial year, eSafety’s Cyber Report Team finalised statutory investigations into more than 8,000 images and videos depicting child sexual abuse. Over 99 percent of these investigations were completed within two business days and neSafety Fact Sheet Dealing with Unwanted Contact PRINTotified to the Australian Federal Police or the INHOPE network.

The eSafety Commissioner, Ms Julie Inman Grant, said research has shown that as many as 1 in 4 young people have been contacted by a stranger online.

“We want to work with parents and carers so they recognise the danger signs of unwanted contact, protect their child’s privacy online, and report suspicious activity and child sexual abuse material,” Ms Inman Grant said.

“Ultimately, everyone has a role to play in combatting predatory behaviour online and putting an end to unwanted and harmful contact from strangers.”

“Online child abuse and exploitation can happen in a range of ways. The predator could be a stranger, online ‘friends’ your child has not met face-to-face, or someone they actually know – which is why we have developed responses and safety strategies that will help parents to talk with their child before a predator does,” she said.

Crime Stoppers, in conjunction with eSafety, has developed a series of Fact Sheets that provide detailed information on how to report child sexual abuse material and a range of prevention strategies to help keep children safe online. These can be downloaded at www.crimestoppers.com.au

Child sexual abuse material can be reported anonymously to the eSafety Commissioner at www.esafety.gov.au/reportillegalcontent

If you know or suspect someone is producing, downloading or sharing child sexual abuse material you can make a confidential report to Crime Stoppers on 1800 333 000 or at www.crimestoppers.com.au