Crime Stoppers Queensland has a rich history that dates back to our inception in 1989. See below about how the Crime Stoppers movement began and key milestones here in Queensland.

The History of Crime Stoppers 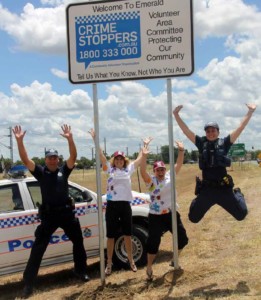 In 1976, a service station in Albuquerque, New Mexico in the United States of America, was held up by two men armed with a sawn-off shotgun. After emptying the cash register, the offenders shot the 19 year old attendant at point blank range. Despite horrific wounds, the victim survived for four hours.

The detective assigned to the case sat with the young man during his final hours, hoping he would be able to give some information which could help solve the crime. Unfortunately, this was not the case. The detective still had high hopes that the murder could be solved. It had all the characteristics of a solvable crime. It happened during peak hours in a busy street of a crowded neighbourhood. Someone must have heard the gunshot or seen the offenders leaving in their vehicle. After three months however, police still did not have a lead to help identify the murderers.

The detective, Greg MacAleese, had been a leading sports journalist until he suffered a stomach ulcer. His doctor advised he seek a less stressful occupation. MacAleese consequently joined the police.

MacAleese tried something different to solve the crime. The owner of the service station where the young man had been murdered offered a $1,000 reward for the arrest of the offenders. MacAleese using his media connections, convinced a local television station to telecast a re-enactment of the crime. Callers were able to phone police anonymously with information about the crime.

Two hours after the re-enactment was telecast, a call was received by police. The caller stated at the time of the murder he had heard what he thought was the backfire of a car. However, after seeing the re-enactment on television, he thought it could have been a gunshot.

Immediately after hearing the noise, he had seen a car racing off down the street. He did not know who owned the vehicle or who was driving, but it was a distinctive looking vehicle, which he knew belonged to someone in the neighbourhood.

After a five-hour door knock involving every member of the homicide squad, the vehicle was located and consequently, the owner. Further investigation resulted in the arrest of both offenders and their subsequent conviction for murder. Crime Stoppers was born.

MacAleese had identified two important reasons why the public had been reluctant to come forward. These were fear and apathy.

It was his opinion that to overcome these problems, a new approach was needed.

To counteract fear, he decided that a system was required which would enable citizens to communicate information on criminal activities with anonymity, allowing them to feel safe from any retaliation. A system evolved whereby anyone calling in with information was issued with a unique identification number.

At no time would they be requested or expected to reveal their own identity; when making repeat calls, they would simply state their code number to identify themselves.

A board of directors drawn from the community was appointed to raise money for the reward fund and to administer the rewards to be paid to those providing information.

MacAleese had received an offer of $100,000 from an insurance company to fully fund the program but refused the offer. He believed, in order for it to work, it was necessary for the general community to feel it was their program and be responsible for raising its funds.

In the United States of America and Canada, the role of the board of directors includes fund-raising, usually through community participation activities such as balls, dinners, fun runs and telethons. The decentralised system of policing in the United States enables each small area to have its own committee and fund-raising is thereby localised. In Queensland this system is the basis for area committees.

The Albuquerque Crime Stoppers officially commenced on 8 September 1976, and as a result of their first call, information was received that led to the solving of a gang rape offence that had occurred 18 months previously.

Just one week later, this first success was repeated when information was received in relation to a serial rapist who had been operating in Albuquerque for four months. This offender had attacked a total of 13 women during that time, abducting them as they walked through the local shopping centre car park.

Many fruitless attempts were made to track down this offender using the ‘conventional’ police methods. This included using a police officer as bait by having her walk through the car park. This method did not catch the rapist, but some 200 men were charged with attempted soliciting for immoral purposes!

This case was referred to the Crime Stoppers unit and a composite sketch was prepared for publication in local media outlets. After publication of this sketch, information was received which led to the arrest of the offender within 24 hours. Considerable evidence was located at the offender’s home which implicated him in these attacks, and after pleading guilty at his subsequent trial, he was sentenced to a total of 300 years in the New Mexico State Penitentiary.

After these two early successes, many police in the Albuquerque Police Department approached the Crime Stoppers unit for help on crimes they were having difficulty solving.

Since the commencement of this first Crime Stoppers program, the concept has been taken up enthusiastically in many other parts of the world, and on an international basis, can lay claim to some impressive results.

In 1987, the first Australian Crime Stoppers program was started by Victoria Police. New South Wales Police followed suit with a Crime Stoppers Unit in early 1989 and later that year Queensland Police worked with the community to introduce the concept. 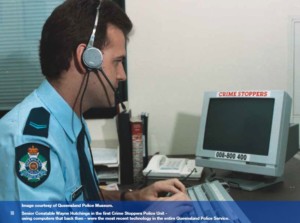 Late in 2016, Crime Stoppers Queensland was very proud to have printed its 25 Year History Booklet. We are enormously grateful to the Brisbane Airport Corporation for their financial contribution as Presenting Partner.

That booklet has now made its way to over 1,000 recipients including former Directors, volunteers, ex Police, current volunteers, partners, sponsors and supporters, representatives of the federal, state and local political parties and members of the judiciary.